All you want to know about Methane

Methane has a direct influence on climate change as well as an indirect effect on human health, plant yield, and productivity due to its role as an important precursor to ground-level ozone formation. CH4 monitoring is an efficient way to detect the buildup of CH4 levels and take necessary actions. This article covers information on methane gas, its sources in the ambient air, permissible levels, health and environmental impact, possible corrective measures, need for methane monitors as well as different methods of CH4 monitoring.

Methane (CH4) is a colorless, odorless, tasteless, non-toxic gas composed of one carbon and four hydrogen atoms. It is a major component of natural gas. CH4 is highly flammable at very high concentrations of about 50,000 ppm.  Methane is considered an asphyxiant at extremely high concentrations.

Methane is the second most important greenhouse gas. It is 28 times ( for 100 years timeframe) more potent than carbon dioxide at trapping the sun’s heat into the atmosphere. However, it has an atmospheric lifetime of around 12 years, much shorter than carbon dioxide. 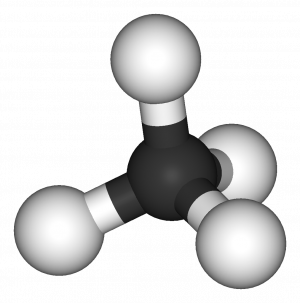 Methane is the most abundant hydrocarbon in the atmosphere. It is produced by the decomposition of organic matter in absence of oxygen by microorganisms (called methanogens). It is naturally present under the ground or underwater (seabed).

Methane is a short-lived climate pollutant. It readily gets converted to carbon dioxide (another greenhouse gas, although less potent) releasing other harmful air pollutants such as volatile organic compounds (VOCs) and ozone

According to the World Meteorological Organization Global Atmosphere Watch Programme, the current average global background level of methane is 1824 ppb. Approximately, natural resources emit 40% of methane and human activities including intensive livestock farming cause emission of the other 60%.

Methane is not toxic in nature and does not harm at low levels. However, it displaces oxygen causing asphyxiation at high concentrations. A human requires about 18% of the oxygen to breathe, hence at high methane levels in confined spaces becomes extremely dangerous.

High-level exposure of CH4 may cause suffocation, loss of consciousness, headache and dizziness, nausea and vomiting, slurred speech, mood changes, vision problems, memory loss, etc. In severe cases, it may also cause rapid breathing, loss of coordination, and numbness. Long term exposure can lead to coma and death

Methane is a highly potent greenhouse gas, second to carbon dioxide making it highly efficient in trapping heat. It is a major contributor to global warming.

CH4 is a major precursor of another greenhouse gas, carbon dioxide. While converting to CO2 in the atmosphere, methane reacts to form volatile organic compounds and leads to the formation of ground-level ozone when mixed with NOx.

The primary action is CH4 monitoring i.e. to measure how much of CH4 concentrations you are exposed to. In addition to this following corrective measures can be taken:

CH4 monitors based on the principle of FID uses a hydrogen flame to ionize the methane in the air. The ionized methane gas produces an electric current proportional to the concentration of methane in the sample air which is detected by the detector.

When a metal oxide semiconductor-based methane monitor is exposed to air samples, the CH4 molecules react on the metal oxide surface of the sensor and dissociate into charged ions which alter the resistance of the film. This interaction is measured as a signal and is converted to the gas concentration.

CH4 monitors working on the electrochemical principle are operated based on the diffusion of methane gas into the sensor which results in the production of electrical signals proportional to the CH4 concentration.

Among all the above principles of CH4 monitoring, methane monitors based on the principle of NDIR are typically found to be preferred for ambient air monitoring as they yield more accurate CH4  concentrations.

Reasons why CH4 monitoring is important