All you want to know about oxides of Nitrogen

NOx, apart from affecting human health and the environment itself, has the potential to produce “secondary pollutants” such as ozone, smog, nitric acid, and particulate matter. These pollutants have negative effects on health and the environment. NOx monitoring is an efficient way to prevent the accumulation of high levels of NOx as it helps detect the amount of NOX we are breathing in and alerts when a certain level is exceeded. This article covers information on nitrogen oxides, its sources, permissible levels in the ambient air, health and environmental impact, possible corrective measures, the need for nitrogen oxide monitors as well as different methods of NOx monitoring.

In atmospheric chemistry, NOx is a collective term used to refer to the nitrogen oxides that are most relevant for air pollution i.e.  NO and NO2. NO2 (nitrogen dioxide)is a reddish-brown acidic gas having a pungent irritating odour comprising one nitrogen atom and two oxygen atoms. It is corrosive and strongly oxidizing. It can combust with compounds such as hydrocarbons, sometimes explosively. Its vapours are heavier than air and are toxic when inhaled. NO2 gas itself is noncombustible, however, it can accelerate combustion.

NO (nitric oxide or nitrogen monoxide) is a colourless, non-flammable, oxidizing, poisonous gas with a slightly irritating odour. It consists of one nitrogen atom bonded to one oxygen atom. It is highly reactive due to the presence of one unpaired electron. Thus, this results in rapid oxidation (within a few minutes) to form NO2.

Nitrogen oxides in the Atmosphere

About 1% of the total NOX forms naturally in the atmosphere by lightning and some are produced by microbial processes in plants, soil, and water. It is typically produced from the reaction of nitrogen and oxygen when fossil fuels such as coal, oil, gas, or diesel are burned at high temperatures. From the nitrogen compounds released during combustion, generally, 10% is NO2 while 90% is NO.

Nitric oxide emitted from these sources, rapidly reacts with oxygen in the atmosphere to form NO2. In the presence of sunlight, it converts back to NO and forms ozone (another critical air pollutant). Therefore, during the day NO, NO2, and ozone (O3) exist in a quasi-equilibrium depending upon the amount of sunlight present.

The atmospheric chemistry in the areas where vehicular emission is a predominant source generally follow the trend given below: 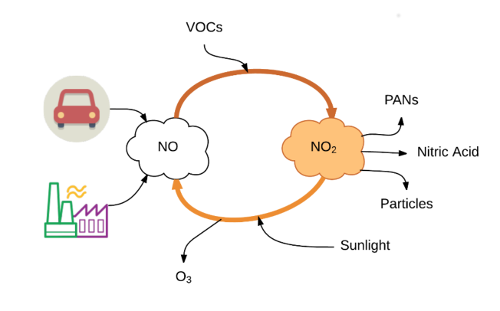 The remaining NO2 eventually reacts with other substances in the air to form particulate matter, gaseous nitric acid (HNO3), and toxic organic nitrates such as PANs (peroxyacetyl nitrates). However, NO2 may travel hundreds of kilometers before their eventual conversion to nitric acid or nitrates.

NOx is primarily released in the air from the burning of fuel. Emissions from vehicles such as cars, trucks, buses, boats, airplanes, etc. are the largest source of nitrogen oxides, followed by emissions from power plants, diesel-powered heavy equipment, and other movable engines, industrial boilers, etc. Other sources of NOx include petrol and metal refining, food processing, and manufacturing industries such as the production of fertilizers. Kerosene or gas heaters or stoves also produce substantial amounts of NOx, which when placed in poorly ventilated spaces would result in a build-up of high levels.Permissible levels of NO2

The breakpoints concentrations describing the quality of air based on nitrogen dioxide concentrations for different countries are given below. In India, the satisfactory levels of daily NO2 are up to 80 µg/m3.

The main effect of breathing in raised levels of nitrogen dioxide is the increased likelihood of respiratory problems. NO2 inflames the lining of the lungs, and it can reduce immunity to lung infections.

Breathing air with a high concentration of NO2 can irritate the airways of the human respiratory system. Exposures for a short period can aggravate respiratory diseases, particularly asthma, leading to respiratory symptoms (such as coughing, wheezing, or difficulty breathing), hospital admissions, and visits to emergency rooms. Longer exposures may contribute to the development of asthma and potentially increase susceptibility to respiratory infections.

People with asthma are more affected as it can cause more frequent and more intense attacks. Children with asthma and the elderly with heart disease are more at risk.

The primary step is NOx monitoring to identify the areas with high NO2 and NO levels or areas where air quality does not meet the NOx national standards. In addition to this following corrective measures can be taken:

It is the most commonly used conventional method of measuring the NOx levels in the air and is based on a chemiluminescent reaction between nitric oxide (NO) and ozone (O3). In the NOx monitor, the air is drawn into two paths. In the first path, the NO2 in the sample is quantitatively reduced to NO using a converter. This converted NO2 along with NO already present in the air reacts with ozone (produced using an ozone generator) to generate activated NO2. During the conversion, light energy at a specific wavelength is produced which is proportional to the amount of NO+NO2 present in the air sample. In the second path, the air is directly reacted with O3 i.e. without passing through the reactor and the light energy produced is directly proportional to the NO present in the air.

The NO2 monitor working with the CAPS principle which operates as an optical absorption spectrometer that measures NO2 directly. Measurement is carried out in a temperature-controlled optical cell containing highly reflective mirrors on both sides to provide extensive optical path length, a blue UV light-emitting diode (LED) centered at 450 nm, and a  vacuum photodiode detector. The NO2 present in the air drawn into the NO2 monitor causes a phase shift in the signal received by a photodetector. This is proportional to the NO2 concentration.

When a metal oxide semiconductor-based NOx monitor is exposed to an air sample, the nitrogen dioxide and nitric oxide molecules react on the metal oxide surface of the sensor and dissociate into charged ions which alter the resistance of the film. This interaction is measured as a signal and is converted to the respective gas concentration. However, when compared to other NOx monitors, the energy consumption of such nitrogen oxides monitors is higher.

NOx monitors working on the electrochemical principle are operated based on the diffusion of nitrogen dioxide and nitric oxide gas into the respective sensor which results in the production of electrical signals proportional to the NO2 and NO concentration respectively. It allows accurate measurement of even low concentrations of NOx, which is essential in NO2 monitoring and NO monitoring for the ambient air.

Among all the above principles of NOx monitoring, applications like ambient air monitoring prefer nitrogen oxide monitors based on electrochemistry. This is because they yield more accurate NOx concentrations and are inexpensive in comparison with the others.

Oizom’s POLLUDRONE measures more than 30 parameters including gaseous pollutants like carbon monoxide, sulfur dioxide, nitrogen dioxide, nitric oxide; dust particulates like PM2.5, PM10, noise and weather parameters like rainfall, wind speed, and wind direction. Most of the sensors measuring gases including NO and NO2 work on the principle of electrochemical sensing. Several cities, campuses and universities have deployed the active sampling powered sensor-based air quality monitor POLLUDRONE for drawing actionable insights to tackle the rise in ambient nitrogen oxide concentrations.

5 Reasons why NOx monitoring is important